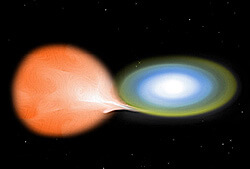 Supernovae can be triggered in one of two ways:

Type I supernova or Type Ia supernova (read as one-a) The difference between Nova and Type I supernova From the billions of galaxies, two basic types have been identified:

Our Galaxy (the Milky Way)

Which of the following sequences below correctly describes the evolution of the Sun from young to old?

A planetary nebula is

Answer: B only bigger stars can form iron cores.

As a star like the Sun evolves into a red giant, its core

Answer: B. At Red Giant Stage the star expands due to heat generated outside the core whereas the core contracts due to the accumulation of heavier elements.