Four major divisions in the ocean relief are: Broadly, there are three types of submarine canyons— 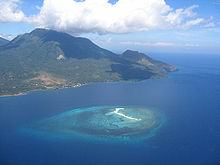 [Coral Bleaching is a very important topic. We will see it later posts] Significance of Study of Oceanic Relief